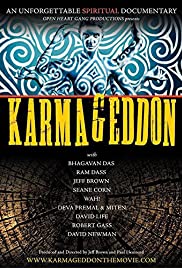 Karmageddon is an investigation of contemporary Western spirituality in the wake of the 1960s. It follows Bhagavan Das, an American whose spiritual journey to India in 1964 would shift American spirituality. He mentored Ram Dass, the Harvard psychology professor fired with Timothy Leary for their experiments into LSD. He inspired the book ‘Be Here Now,’ a key document of 20th century spiritual literature that brought Eastern practices to the West. Since the 1960s, Bhagavan Das has worked as a kirtan chanter and guru. He has also slept with over 500 women while at times dropping his spiritual calling to sell used cars and encyclopedias. The film follows one of his devotees as he attempts to navigate the gap between 1960s and contemporary spirituality.